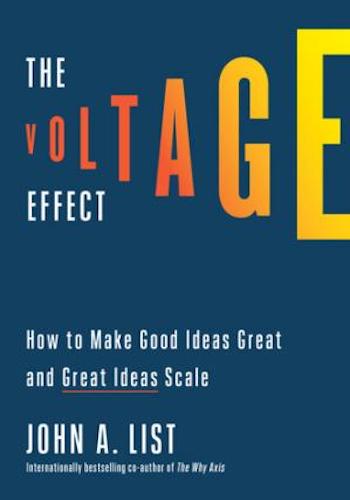 The Voltage Effect: How to Make Good Ideas Great and Great Ideas Scale

书籍简介：”A leading economist answers one of today’s trickiest questions: Why do some great ideas make it big while others fail to take off? “Scale” has become a favored buzzword in the startup world. But scale isn’t just about accumulating more users or capturing more market share. It’s about whether an idea that takes hold in a small group can do the same in a much larger one-whether you’re growing a small business, rolling out a diversity and inclusion program, or delivering billions of doses of a vaccine. Translating an idea into widespread impact, says University of Chicago economist John A. List, depends on one thing only: whether it can achieve “high voltage”-the ability to be replicated at scale. In The Voltage Effect, List explains that scalable ideas share a common set of attributes, while any number of attributes can doom an unscalable idea. Drawing on his original research, as well as fascinating examples from the realms of business, policymaking, education, and public health, he identifies five measurable vital signs that a scalable idea must possess, and offers proven strategies for avoiding voltage drops and engineering voltage gains. You’ll learn: How celebrity chef Jamie Oliver expanded his restaurant empire by focusing on scalable “ingredients” (until it collapsed because talent doesn’t scale) Why the failure to detect false positives early on caused the Reagan-era drug-prevention program to backfire at scale How governments could deliver more services to more citizens if they focused on the last dollar spent How one education center leveraged positive spillovers to narrow the achievement gap across the entire community Why the right set of incentives, applied at scale, can boost voter turnout, increase clean energy use, encourage patients to consistently take their prescribed medication, and more. By understanding the science of scaling, we can drive change in our schools, workplaces, communities, and society at large. Because a better world can only be built at scale”–

The Youtube Formula: How Anyone Can Unlock the Algorithm to Drive Views, Build an Audience, and Grow Revenue

Demand: How to Build a Smarter Sales Funnel So You Can Turn Down Better Business