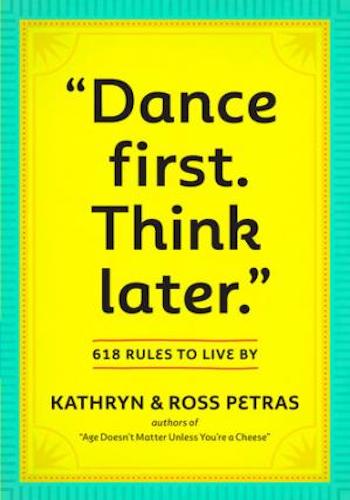 书籍简介： Timeless in their wisdom, thought-provoking in their message, surprising in their truth and memorable in their originality, the right words can give direction, inspiration, and sometimes a tangible boost onto the right path. For example, Steve Jobs once read Stay hungry Stay foolish on the back cover of The Whole Earth Catalog, and those four words came to guide his life. Created by Kathryn and Ross Petras, connoisseurs of quotes, whose books and calendars have over 56 million copies in print, “Dance First. Think Later.” is a collection of the greatest life wisdom from an unexpected group of speakers, doers, and thinkers. There are 618 rules to live byfunny, sly, declarative, thoughtful, offhanded, clever, and always profound: Watch with glittering eyes the whole world around you, because the greatest secrets are always hidden in the most unlikely places. Roald Dahl If everything is under control, you are going too slow. Mario Andretti Never make a credit decision on a beach.Victor J. Boschini Dance first. Think later. Its the natural order.Samuel Beckett The only time to eat diet food is while waiting for the steak to cook. Julia Child What you spend years building may be destroyed overnight; build it anyway. Mother Teresa And: Be yourself. Everyone else is already taken.Oscar Wilde

Champions of Illusion: The Science Behind Mind-Boggling Images and Mystifying Brain Puzzles