Skip to content
Home » 英语电子书 » Half of a Yellow Sun 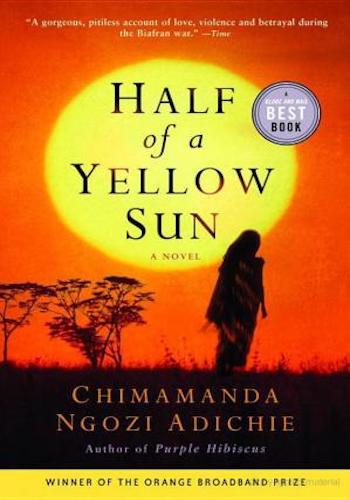 Half of a Yellow Sun

书籍英文名: Half of a Yellow Sun

书籍简介：Starred Review. When the Igbo people of eastern Nigeria seceded in 1967 to form the independent nation of Biafra, a bloody, crippling three-year civil war followed. That period in African history is captured with haunting intimacy in this artful page-turner from Nigerian novelist Adichie (Purple Hibiscus). Adichie tells her profoundly gripping story primarily through the eyes and lives of Ugwu, a 13-year-old peasant houseboy who survives conscription into the raggedy Biafran army, and twin sisters Olanna and Kainene, who are from a wealthy and well-connected family. Tumultuous politics power the plot, and several sections are harrowing, particularly passages depicting the savage butchering of Olanna and Kainene’s relatives. But this dramatic, intelligent epic has its lush and sultry side as well: rebellious Olanna is the mistress of Odenigbo, a university professor brimming with anticolonial zeal; business-minded Kainene takes as her lover fair-haired, blue-eyed Richard, a British expatriate come to Nigeria to write a book about Igbo-Ukwu art—and whose relationship with Kainene nearly ruptures when he spends one drunken night with Olanna. This is a transcendent novel of many descriptive triumphs, most notably its depiction of the impact of war’s brutalities on peasants and intellectuals alike. It’s a searing history lesson in fictional form, intensely evocative and immensely absorbing. (Sept. 15)

My Life in Full: Work, Family, and Our Future

ACT with Love: Stop Struggling, Reconcile Differences, and Strengthen Your Relationship with Acceptance and Commitment Therapy