Skip to content
Home » 英语电子书 » What Storm, What Thunder 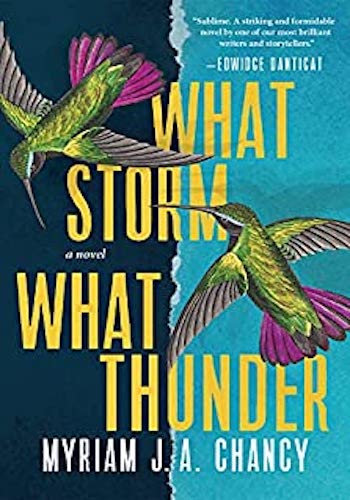 What Storm, What Thunder

书籍英文名: What Storm, What Thunder

书籍简介：The story of the earthquake that devastated Haiti in 2010, told through ten voices

In this masterful literary portrait of contemporary Haiti, Myriam J. A. Chancy deftly reveals the inner lives of ten people by recounting how each survives—or fails to survive—a catastrophe.

Chancy’s intimate prose draws the reader into the hopes, dreams and regrets of a cast of characters in Port-au-Prince: a wealthy expat with a secret daughter; an architect who drafts affordable housing for an NGO; a small-time drug trafficker who pines for a beautiful call girl; a sex worker and her business partner who are followed by a man they believe is the vodou spirit of death; an emigrant musician who drives a taxi; a teenaged girl who longs for the life she sees in a telenovela; a grieving mother in a camp for displaced people; her husband, an accountant forced to abandon the wife he loves; their son, who haunts them both; and the old woman selling produce…