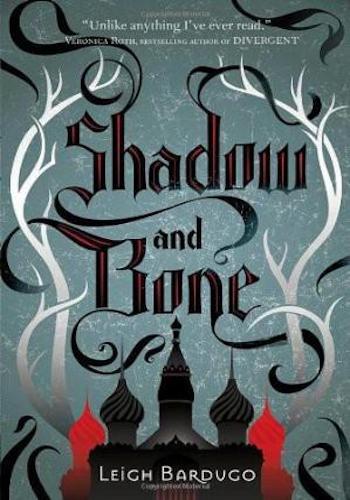 书籍简介：Surrounded by enemies, the once-great nation of Ravka has been torn in two by the Shadow Fold, a swath of near impenetrable darkness crawling with monsters who feast on human flesh. Now its fate may rest on the shoulders of one lonely refugee.

Alina Starkov has never been good at anything. But when her regiment is attacked on the Fold and her best friend is brutally injured, Alina reveals a dormant power that saves his life—a power that could be the key to setting her war-ravaged country free. Wrenched from everything she knows, Alina is whisked away to the royal court to be trained as a member of the Grisha, the magical elite led by the mysterious Darkling.

Yet nothing in this lavish world is what it seems. With darkness looming and an entire kingdom depending on her untamed power, Alina will have to confront the secrets of the Grisha…and the secrets of her heart.

Amazon Best Books of the Month, June 2012: Alina Starkov has never been anything more than yet another orphan of her country’s on-going wars…until she channels magic not seen in centuries to protect her best friend, Mal. Her new-found powers attract the attention of the Darkling, the most powerful of the country’s magic-wielders. He tells Alina that her magic could heal the Shadow Fold, if she can only learn to control it–and if she agrees to trust the Darkling despite the mystery that surrounds his very existence. Leigh Bardugo brings a cast of well-defined characters and a unique magic system to her lavishly imagined world, where light doesn’t always conquer dark and deception runs so deep that it becomes truth. And yet, against all expectations, the bonds of sacrifice and friendship remain too strong to be severed in this thrilling debut. –Malissa Kent

“A rich fantasy landscape, an inspired magical structure, and a gratifying emotional hook keep the pages whirring by until a final twist upends assumptions and lands us smack in the middle of a harrowing climax. “–Horn Book Magazine

“Filled with lush descriptions, intriguing magic, and plenty of twists, this memorable adventure offers action and intrigue mixed with an undercurrent of romance and danger.”–Publishers Weekly

“Bardugo weaves a captivating spell with lushly descriptive writing, engaging characters, and an exotic, vivid world. Readers will wait impatiently for the next installment.”–Booklist

The Story of Food: An Illustrated History of Everything We Eat

The Complete Book of Calligraphy & Lettering: A Comprehensive Guide to More Than 100 Traditional Calligraphy and Hand-Lettering Techniques