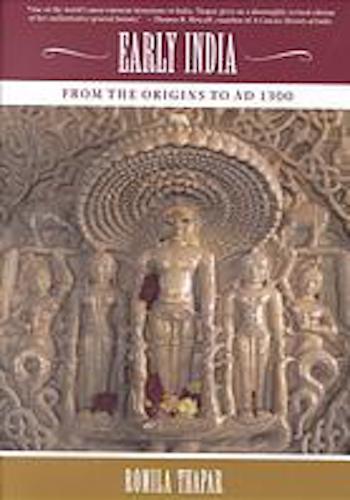 书籍英文名：Early India : from the origins to AD 1300

书籍简介：Early India represents a complete rewriting by Romila Thapar of her classic work, A History of India (the first volume in the Penguin History of India series), thirty-five years after it was first published. Thapar has incorporated the vast changes in scholarly understanding and interpretation of Indian history that have occurred during her lifetime to revise the book for a new generation of readers. This new work brings to life thousands of years of history, tracing India’s evolution before contact with modern Europe was established: its prehistoric beginnings; the great cities of the Indus civilization; the emergence of mighty dynasties such as the Mauryas, Guptas, and Cholas; the teachings of the Buddha; the creation of heroic epics such as the Mahabharata and the Ramayana; and the creation of regional cultures. Thapar introduces figures from the remarkable visionary ruler Ashoka to other less exemplary figures. In exploring subjects as diverse as marriage, class, art, erotica, and astronomy, Thapar provides an incomparably vivid and nuanced picture of India. Above all, she shows the rich mosaic of diverse kingdoms, landscapes, languages, and beliefs.

A Study in Scarlet; The Hound of the Baskervilles; The Valley of Fear; The Sign of Four (Penguin Classics Deluxe)

American Law in the 20th Century

China: The Bubble that Never Pops