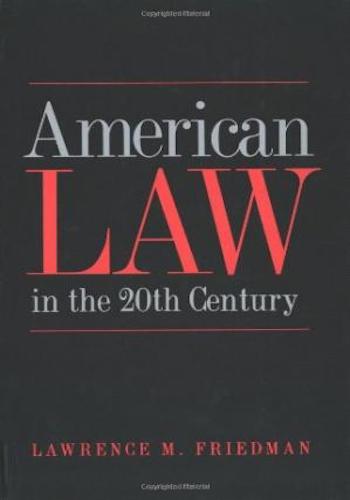 American Law in the 20th Century

书籍英文名：American Law in the 20th Century

书籍简介：In this long-awaited successor to his landmark work A History of American Law, Lawrence M. Friedman offers a monumental history of American law in the twentieth century. The first general history of its kind, American Law in the Twentieth Century describes the explosion of law over the past century into almost every aspect of American life. Since 1900 the center of legal gravity in the United States has shifted from the state to the federal government, with the creation of agencies and programs ranging from Social Security to the Securities Exchange Commission to the Food and Drug Administration. Major demographic changes have spurred legal developments in such areas as family law and immigration law. Dramatic advances in technology have placed new demands on the legal system in fields ranging from automobile regulation to intellectual property. Throughout the book, Friedman focuses on the social context of American law. He explores the extent to which transformations in the legal order have resulted from the social upheavals of the twentieth century-including two world wars, the Great Depression, the civil rights movement, and the sexual revolution. Friedman also discusses the international context of American law: what has the American legal system drawn from other countries? And in an age of global dominance, what impact has the American legal system had abroad? Written by one of our most eminent legal historians, this engrossing book chronicles a century of revolutionary change within a legal system that has come to affect us all.

How I Made Over $1 Million Using The Law of Attraction

A Study in Scarlet; The Hound of the Baskervilles; The Valley of Fear; The Sign of Four (Penguin Classics Deluxe)