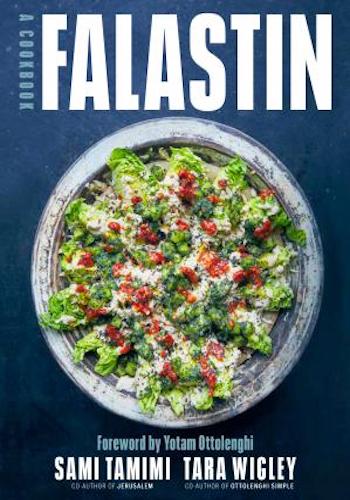 书籍简介：A soulful tour of Palestinian cooking today from the Ottolenghi restaurants’ executive chef and partner—120 recipes shaped by his personal story as well as the history of Palestine.

“Truly, one of the best cookbooks of the year so far.”— *Bon Appétit*

The story of Palestine’s food is really the story of its people. When the events of 1948 forced residents from all regions of Palestine together into one compressed land, recipes that were once closely guarded family secrets were shared and passed between different groups in an effort to ensure that they were not lost forever.

In  Falastin  (pronounced “fa-la-steen”), Sami Tamimi retraces the lineage and evolution of his country’s cuisine, born of its agriculturally optimal geography, its distinct culinary traditions, and Palestinian cooks’ ingenuity and resourcefulness. Tamimi covers the territory between the Mediterranean Sea and the Jordan River—East Jerusalem and the West Bank, up north to the Galilee and the coastal cities of Haifa and Akka, inland to Nazareth, and then south to Hebron and the coastal Gaza Strip—recounting his upbringing with eleven siblings and his decision to leave home at seventeen to cook in West Jerusalem, where he met and first worked with Yotam Ottolenghi.