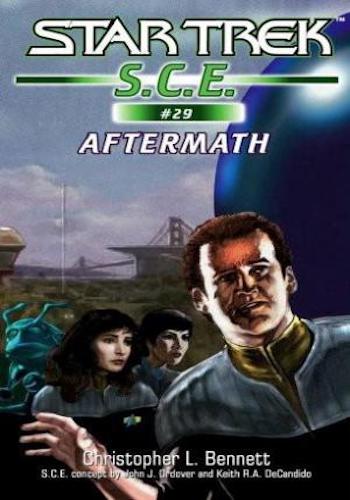 The U.S.S. da Vinci is at last ready to resume its mission after the catastrophic events of Wildfire — but before the ship can even leave Spacedock, a mysterious alien vessel appears out of nowhere in San Francisco. With the aid of Captain Montgomery Scott and former Starship Enterprise™ and Deep Space Nine™ engineer Miles O’Brien, the S.C.E. must investigate the alien vessel and learn if this is an attack, a first contact — or something worse….

What they find may land the Federation in the midst of an interdimensional war, as Commander Sonya Gomez works with Starfleet legends from two generations to untie the secrets of the alien ship before it’s too late!

Keith R.A. DeCandido was born and raised in New York City to a family of librarians. He has written over two dozen novels, as well as short stories, nonfiction, eBooks, and comic books, most of them in various media universes, among them Star Trek, World of Warcraft, Starcraft, Marvel Comics, Buffy the Vampire Slayer, Serenity, Resident Evil, Gene Roddenberry’s Andromeda, Farscape, Xena, and Doctor Who. His original novel Dragon Precinct was published in 2004, and he’s also edited several anthologies, among them the award-nominated Imaginings and two Star Trek anthologies. Keith is also a musician, having played percussion for the bands the Don’t Quit Your Day Job Players, the Boogie Knights, and the Randy Bandits, as well as several solo acts. In what he laughingly calls his spare time, Keith follows the New York Yankees and practices kenshikai karate. He still lives in New York City with his girlfriend and two insane cats.

英语电子书|Stamped From the Beginning: The Definitive History of Racist Ideas in America