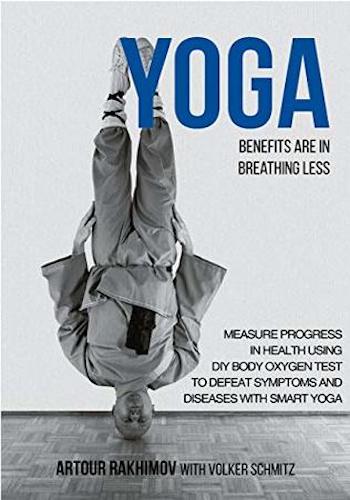 书籍简介：Since the 1960’s, yoga books and nearly all yoga teachers have started to promote the deep-breathing myth: one should breathe more air (even at rest) and expel “toxic” CO2 (carbon dioxide). However, hundreds of clinical studies showed and proved that hyperventilation reduces oxygen levels in cells, while CO2 is crucial for health.

Deep breathing, as during pranayama, only looks deep. In reality, as ancient yoga texts teach, pranayama should be done with maximum breath holds and accumulation of CO2 in order to achieve slower breathing after each practice and 24/7. Only with progress in pranayama (extension of all stages), can one get the main benefits of yoga, weight loss, and other positive effects.

Millions of people believe in another myth that in order to gain health improvements from practicing yoga, one should perform progressively more difficult poses. However, you can practice poses for months or years, but doing these poses alone does not guarantee that your health is going to improve.

Yoga’s benefits and true Yoga spirit, as ancient yoga Sanskrit books teach, are in breathing less air 24/7, even less than the tiny medical respiratory norm. Here are some general ideas that have been confirmed by hundreds of clinical studies quoted in this book:

Severely sick and hospitalized people
* Respiratory frequency (at rest and during sleep): >25 breaths/min
* Body oxygenation (result for the CP test):

英文电子书|Yoga Guide for Beginners: 101 Poses and Sequences for Strength, Flexibility and Mindfulness

英文电子书|Yoga For Kids Simple First Steps in Yoga and Mindfulness